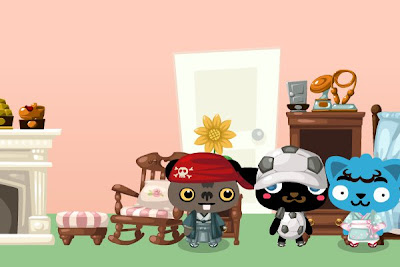 A nationwide naming contest has started to name the pair of pandas that China has promised to loan Singapore in 2011. The pair of male and female pandas will be staying in the hot and humid Singapore for 10 years. Though other countries might find it impossible for the pandas to survive in the hot and humid Singapore, like any other Singaporeans, Ah Fook is well aware that Singapore is actually the most suitable country for the pandas to consider migration! The pandas can be rest assured that they will have a controlled cold and dry environment waiting for them! And if the air-con is too cold for them, they can wear winter clothing like the other Singapore office workers!

Back to the naming contest, Ah Fook and friends were trying to think of a suitable name for the pandas...

AH FOOK: Har? Why French? These pandas are from China leh!

KIMONO GAL: Why not? French names are classy mah! We name our condos Montebleu and L'viv also what! It's not as if these condos are built by the French! We didn't name our condos Uccaghara and Maharigaghara because the banglas built them right?

AH FOOK: Then lagi cannot! If we're already naming so many things in French, then there must be alot of people sending in French names as well! Then our names are not unique anymore!

FOOTBALL CRAZE GUY: No, no, no... let's name them after the table tennis players who won the world championship for Singapore! One will be Tianwei, the other Yuegu!

KIMONO GAL: I don't think it's a good idea.

FOOTBALL CRAZE GUY: Why not? Chinese names for Chinese pandas what!

KIMONO GAL: Hello? Our Singapore Chinese players beat the China Chinese players! To name the pandas that they loan us with the names of players that beat them... very politically incorrect right?

KIMONO GAL: Some more, how can you give the male panda a female name? You should know how much our gahmen hate gays right? We're one of the few remaining countries that still have Section 377A of the Penal Code!

AH FOOK: Actually... I think I might just have the best names for these pandas... Why don't we name them Gong-Panda and Mu-Panda?

AH FOOK: Yah! Good right? They are symbolic in meaning and easy to pronounce! And by using the Chinese "Gong" and "Mu" instead of "Male" and "Female", it reflects the close relationship between Singapore and China!

KIMONO GAL: But isn't that a bit too... like... straight forward?

AH FOOK: Got meh? We also named the shopping center at 313 Orchard Road 313@Somerset and the low cost terminal as Budget Terminal what!