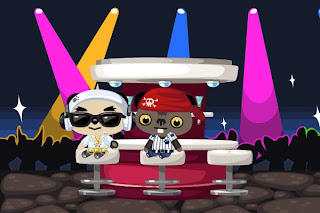 When Ah Fook saw the MRT train with garish graffiti, he thought "Wow! Finally the MRT company decided to spend money to decorate our trains!" He didn't expect it to be a vandalism. But can it even be called a vandalism when for the very first time, Ah Fook actually feels that the MRT train looks cool! In fact it would have been better if not only one carriage, but the whole train is painted! So, depressed that the authority will definitely swiftly get rid of those nice graffiti and give the passengers back their boring gray trains, Ah Fook went for a drink with his hippy friend.

AH FOOK: Hey bro, you saw the graffiti on the MRT train?

AH FOOK: Yah lor, damn cool! But too bad it's going to be removed...

HIPPY FRIEND: Yah man! Wasted! For once I felt like taking the MRT train! Anyway who is this genius?

HIPPY FRIEND: Wait! Lemme guess! He must be not from this country!

AH FOOK: DUH! That's a no-brainer right? Since when will our country breed such creative talent!

HIPPY FRIEND: Ahahahaha! Totally! Our country only produce boring scholars! Hahaha! So sad! So tell me! Who is this guy? Where is he from?

HIPPY FRIEND: Cool! So he sneaked into the MRT depot in the middle of the night?

AH FOOK: Yap, he managed to cut through the wire fences and sneaked into the depot at Changi! Power sia!

HIPPY FRIEND: Dude, I must meet this guy man! But you know what's the problem? The boring authority is sure to punish him for it. That's pathetic. I didn't mean the Swiss guy. But anyway it's also not right that he can just sneak into a MRT depot so easily. I mean, isn't that place supposed to be a high security area? What if some terrorist instead of an artist sneaked in? We would have a bomb in the train and not some fancy art!

HIPPY FRIEND: Exactly! Where were the security guards when he sneaked in?

AH FOOK: Er... but friend, have you seen the kind of security guards we have in the country? Most of them are retired old man, and the rest very fat man. Our security guards all cannot make it one lah!

HIPPY FRIEND: Well, I understand we can surely close one eye when recruiting guards for office buildings and condominiums, but these kind of restricted area should have top notch security guards right? Perhaps some macho men who can win a Gold at every IPPT and know at least one form of martial art?

AH FOOK: Hello? You thought how much are these security guards earning? You pay peanuts you get monkeys hor!

HIPPY FRIEND: Ha! But I thought peanuts are expensive in this country? Mrs Goh's peanut not cheap, remember?


At least the free graffiti looks so much better than some of the post boxes that Singpost paid to be spray-painted to promote YOG right?

(Photo in courtesy of Straits Times)
Posted by Unknown at 8:57 PM