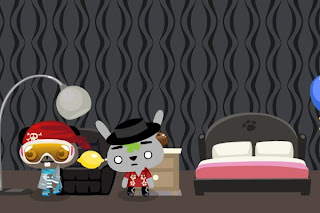 (Photo in courtesy of Pet Society)

Ah Fook's lawyer friend was attending a top-level conference at a world class integrated resort which was newly opened, so he took the opportunity to have a look at how an expensive and high class integrated resort looks like. After getting stuck in the lift with other angry delegates of the conference for a while, Ah Fook eventually reached his lawyer friend's hotel room.

AH FOOK: Wah... dude, your room is in pitch dark!
LAWYER: Yes... for the past one hour.
AH FOOK: Er... and you don't intend to switch on the lights? Oh! Oops! Did I come in at a wrong time? Are you having... erm... special guest?
LAWYER: No! Ah Fook! For goodness sake! It's a blackout lah!
AH FOOK: Yah right... quit kidding and go switch on the lights won't you? Blackouts only happen in other countries, like Bali and India...
LAWYER: Apparently it happens in a world class integrated resort hotel as well.
AH FOOK: Oh... you didn't off the lights?
LAWYER: No I didn't.
AH FOOK: ...
LAWYER: ...
AH FOOK: And I guess you didn't switch off the air-con as well?
LAWYER: No, the air-con is not working, as well.
AH FOOK: Er... in that case, why didn't you go downstairs to grab a drink instead? Better than being stuck here in a dark and stuffy room right?
LAWYER: The lifts were not working just now, but yah, since you're here, it must mean that the lifts are okay now so we should go.
AH FOOK: Well, kinda of... though there's still the danger of getting stuck in it... again...
LAWYER: ...
AH FOOK: Erm... but I guess going down the stairs is not going to be as tiring as getting up, so why don't we just take the stairs?
LAWYER: Yah, sounds like the only solution now. I really wanna get out of this lemon room.
AH FOOK: But wait, can I use your bathroom first? I was stuck in the lift for some time, you know?
LAWYER: You can't. The toilet cannot be flushed.
AH FOOK: Oh...
LAWYER: Anyway, we're going to sue the integrated resort for all these aggravation and embarrassment.
AH FOOK: Can you do that?
LAWYER: Why not? We're lawyers! Plus we don't have to pay to sue people.


What's happening: IPBA to MBS: How will you compensate us?
Posted by Unknown at 12:13 AM