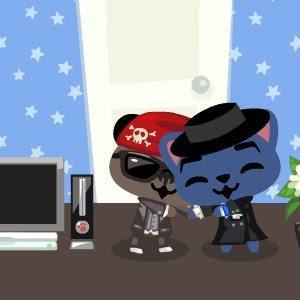 Ever since the opening of the two Integrated Resorts, Brother Loong had been so busy with work that Ah Fook hardly see him at his regular relax spots, thus Ah Fook decided to pay him a visit to check things out.

BROTHER LOONG: Fook! How nice of you to come visit me! Oh... don't tell me you need cash!

BROTHER LOONG: Hahaha... just surviving! Surviving! But yes, ever since the opening of the two IRs, my men and I have been working days and nights! Lending, collecting lending and collecting again!

AH FOOK: Good for you! But this means with the opening of the two IRs, there're really more people gambling lor?

BROTHER LOONG: Hmm... in a way lor... but actually most of the people who visit the IRs are already regular gamblers who used to gamble on cruises and Genting lah.

AH FOOK: But these locals really don't mind paying a hundred dollars just to go into the casino?

BROTHER LOONG: Fook, you've got to think like a gambler! You see, though they need to pay a hundred dollars of levy, but they don't have to waste time traveling out to sea or up a mountain! Time is also money to these people, you know? And what is one hundred dollars to them compared to the kind of money that they're prepared to lose!

AH FOOK: Oh... that's true... so your men will also pay a hundred dollars to go into the casino?

BROTHER LOONG: Yap, I do send some of them in, so that the people can lend money from us on the spot, don't even need to leave the casino. Then I'll place some at the ATMs too, so that the people know who to turn to when they've reached their withdrawal limits.

AH FOOK: Wow... seems like the actual people who benefits from the IRs are actually loan sharks like you man!

BROTHER LOONG: No, no, Fook, you're so wrong! We're just ikan bilis! We're not the biggest winner! The gahmen is!

AH FOOK: Huh? The gahmen? Because of the increase of visitors to the country?

BROTHER LOONG: No lah, Fook! The IRs are never built just to attract tourists! The gahmen must know that like the F1 racing, after the first two years, people are not interested anymore!

AH FOOK: Then what do they benefit from building the IRs?

BROTHER LOONG: Tax! Didn't you hear? After the IRs are opened for just few months only, the gahmen has collected $70 million in casino entry levies already! That is some big money okay!

BROTHER LOONG: Yah! Smart right, the gahmen? They're sick and tired of the people giving their money across the causeway liao lah! Hey Fook, by the way, I heard you're still jobless right? Wanna come help me oversee my operations? Just help me to make sure my runners come back with the money?