Don't ever eat at a Korean restaurant with a non-Korean name!

Seriously, when we read the name out loud, we should have seen it coming. L.C. Korean BBQ Buffet. What kind of authentic Korean restaurant will have a non-Korean name that sounds like some vulgar Hokkien words? Well, because there is nothing Korean about this restaurant at all.

What drove us all the way to this tiny restaurant tagged among other bigger, better BBQ or steamboat restaurants around Bugis is greed. Pure Kiasu Greed. We bought a half price coupon from Groupon:

This is the Groupon that started our Nightmare on Tan Quee Lan Street. And no, the BBQ pit does not look anywhere near what is shown on the Groupon site.

The first hurdle was to get a booking, we could only use the Groupon from Mondays to Thursdays (like any other calculative restaurants in Singapore, Friday is already a weekend that deserves weekend prices), and because the restaurant is always claimed to be full, we took over a month to finally get a 8pm slot on Thursday night. And we were reminded we had to leave in 2 hours at 10pm, though the shop closes at 11:30pm.

Finally that fateful day came and we were at the restaurant. What greeted us was a China woman dressed like she was working at a kopitiam, and then an induction cooker with a piece of glass on it. TADA! Korean BBQ! Riiight... 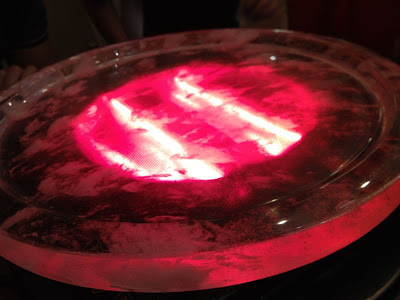 And then she took advantage of the period of shock and disbelief while we stared at the "BBQ pit" and asked quickly whether we wanted to add a dollar to add a hot pot as well, and we said "Yes". Then another smaller induction cooker was switched on and a small metal pot smaller than the one I used to cook my instant noodles appeared. "Chicken soup, Mala chili soup or Tom Yam?" she asked. We asked for chicken soup and that was when we started overdosing ourselves with MSG water.

By now we realised that we did not see pans of meat and vegetables around this BBQ buffet restaurant, which means it was going to be À la carte buffet. Swiftly, she took up a pencil to cancel a couple of items from the menu then handed over to us to order. Hmm... apparently cheapskate people who use Groupon are not entitled to more expensive food like crabs, prawns, not even Taiwan sausages. And the menu was very very limited. In fact I've never seen such a short BBQ buffet menu before in my whole life.

So, the menu. These are the food items that we remembered because (a) we ordered it (b) we ordered it but they didn't deliver to us (c) we are not allowed to order it.

By the second order, we realised that the checkbox next to the food item was not meant for numbers. Because no matter how many plates we wrote, only one pathetic plate will turn up at the table. So my friend asked the China man who delivered the food to us why was there only one plate of beef when we ordered four. He looked blankly at him, gave a "Ha" mocking laugh and walked away. Wow. This is one new low of service level that you don't see in Singapore. After calming the fire in his eyes, my friend called the other China lady over and asked the same question. Slowly and casually, she said, "You can order more after you finished the other food". Wow. Wow.

So at the end of the day, this is a small kopitiam setting with aircon that makes you perspire, added some plastic chairs, plastic utensils and induction cookers to call itself a restaurant. Oh because they hang up some pictures of Korean women in traditional hanbok, that makes it a Korean restaurant. Non of the food is seasoned the way Korean BBQ food are seasoned but because Kim Chi is one of the item in the menu, this is a Korean BBQ Buffet restaurant. And it is run by three China Chinese.

Lesson learned: Next time Google before buying any Groupon of unknown "restaurants". 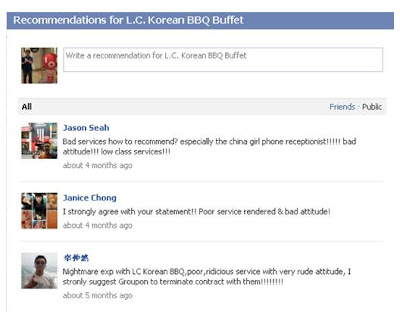 Oh one last thing, we all cheered this restaurant name in Hokkien when we left. 3 cheers for them.
Posted by Unknown at 9:55 AM

Hello. It's too bad I didn't do a google search for this restaurant before I bought it. We experienced the exact same thing as you did. And to make the matter worse, there was a pair of foreign looking customers before us with the same concerns. It got so bad that the police even got involved. Way to make an international impression.

Oh. Another thing, we did not proceed to eat in the restaurant and called up groupon. We got a refund.

I also went . Terrible food. When making reservations they say fully booked. But when u are there, you are only one in restaurant. No other customers for the whole time !!! They make reservations difficult. Got cheated !!! Never never go there !!! Tell everyone !!!!

If you want to obtain much from this post then you have to apply these strategies to your
won blog.