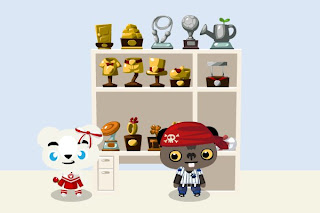 Ah Fook heard that Singapore China Team has beaten the China China Team to win in the World Table Tennis Championship! With tears of great happiness, Ah Fook hurried over to Pingpong Player's house to congratulate her!

AH FOOK: Congrats! Congrats! So after all these years, the Singapore China team has finally won the China China team!

AH FOOK: So you gals have finally proven that the Foreign Sport Talent Scheme does work!

AH FOOK: And the table tennis association chairperson can finally see black on her balance sheet!

PINGPONG PLAYER: Hmm... I guess so... after all, this championship has brought in huge profit for the association...

AH FOOK: Huge profit? How so?

PINGPONG PLAYER: Well, we've won a world championship medal back, that's for sure. But in return, there is no bonus for the players. Just business as usual. So I guess you guys call it great ROI?

AH FOOK: No way! No bonus for winning a world championship?!

PINGPONG PLAYER: Really lah... Because this is just a single game event, not the glam glam Olympics or Asean Games, so the country will not reward us.

PINGPONG PLAYER: Yap, not glam enough. Although one of the ministers said either the table tennis association or country sports council should consider rewarding us but... chairperson already said 'No'. The association will not ask for rewards from the country. Well but if some private corporation decided to give us some reward, she has no objection to that.

AH FOOK: Er... but babe, why will any private corporation give you gals money out of nowhere? Come'on! These private corporations don't even donate a single cent during charity shows, you think they'll donate reward to you gals? A bit of fat hope right?

AH FOOK: But hey, is the table tennis association under the country sports council?

PINGPONG PLAYER: I think so bah...

AH FOOK: And the country sports council is statboard right?

PINGPONG PLAYER: Should be bah...

AH FOOK: Aiyah! Then at least you'll have half a month of salary plus $300 of mid-year bonus!

PINGPONG PLAYER: Er... but are we considered civil servant?

PINGPONG PLAYER: The chairperson yes lah, as for us... I guess we're just servants without the civil?