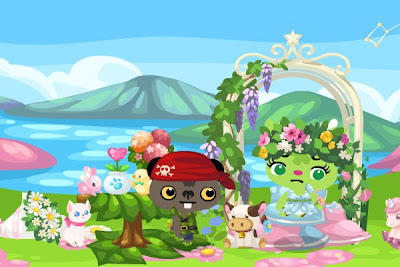 Ah Fook can't help but find that this World Cup is way too weird... Italy out? France out? And even England can't make it to the quarter-finals? Ah Fook knows something must be wrong, maybe some African voodoo is in play! So in order to protect his investment in the Singapore Pools, Ah Fook decided to pray to the Lakeside Mazu.

AH FOOK: Oh the Mighty Lakeside Mazu, please listen to my prayers and grant my wishes!

LAKESIDE MAZU: What? Another pastor?

AH FOOK: No, no! I'm not a pastor and I don't have a celebrity wife living in Hollywood! I'm here to pray for my team to win in the World Cup!

LAKESIDE MAZU: Are you from South Korea? Japan?

LAKESIDE MAZU: What? It can't be! A few years ago, one of your ministers did look for me, and asked for something like Goal 2010, but I didn't grant him his wish because he wanted me to grant him his wish cheaper, better and faster! How greedy! So no! There is no way for the Singapore team to enter the World Cup!

AH FOOK: No, no, we didn't enter the World Cup, that's why we support different country teams all over the world during the World Cup! We love supporting other country teams so much that we'll even pay ninety bucks to watch them play!

LAKESIDE MAZU: Whatever! Even if it's not for winning the World Cup, do not expect me to grant any Singaporean any wish!

AH FOOK: Oh Mighty Lakeside Mazu, why do you hate us so much?

LAKESIDE MAZU: Because you people catch my general and eat him up!

AH FOOK: Er... your general? I know we're guilty for trying to bear paws from food show and we're even the suspect that force the Sri Lanka crabs into extinction, but we're not cannibals leh...

LAKESIDE MAZU: Oh yeah? You think I don't know is it? Don't forget that I'm the Mighty Lakeside Mazu! Your people caught my 150 kilogrammes and 2 metres long General Garoupa and is now selling him at $20 per dish! How dare you!

AH FOOK: Oh! So that's your general! Er... but we the citizens of Singapore plague ourselves to eat all seafood that is unique and overpriced leh!

LAKESIDE MAZU: Well, then you Singaporeans shall be cursed! I curse that Singapore can never be flood free! I curse that you shall have more heavy downpour and thunderstorms! MUAHAHAHAHA!

Good post and this fill someone in on helped me alot in my college assignement. Say thank you you as your information.