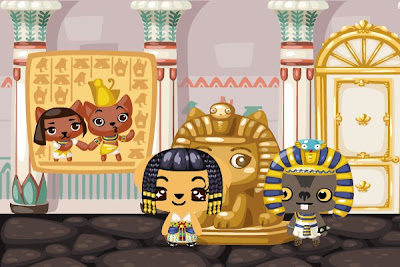 Long long time ago, Ah Fook's ancestor was one of the short-lived pharaoh of ancient Egypt. Pharaoh Fook the Second had taken his crown from his father Pharaoh Fook the First, and had ruled the kingdom for a couple of years. But alas! Nobody had expected that in the year of 2010BC when ancient Egypt had a record growth year, the whole kingdom was literally wiped off from the face of earth! This was what actually happened a few months before the great disaster...

PHARAOH FOOK II: What an exceptional year, my queen! Ah! Double-digit growth this year, I see!

PHARAOH FOOK II: Ah! Of course, my queen! But first, more bonus for my officers and generals!

QUEEN CLEOPRATA II: And how will the people benefit from the growth? Less tax?

PHARAOH FOOK II: Oh no, my queen! Did the royal physician give you some medicine so wrong? We never lower our tax! We tax more to help the poor! And for the rest of the people, we need to press them on with more restructuring and improving productivity to sustain long-term growth!

QUEEN CLEOPRATA II: Yes, my pharaoh the intelligent one! Work harder and betterer our workers will, so that we have more growth!

PHARAOH FOOK II: Ah, more foreign workers we will need. But the numbers we must also manage, so that the people complain will not! Only more than 100,000 extra foreign workers I see this year. I cannot see otherwise, and we have to accept that.

PHARAOH FOOK II: Yes, my queen! More pyramids we will build, more palaces we will have! More road works, more historical places to pull down for more private houses! And a temple to worship me is in the plan!

QUEEN CLEOPRATA II: But my pharaoh, will the roads not be too crowded? Public transport even more crowded? Will there be enough tables during lunch time?

PHARAOH FOOK II: More people of course more crowded. I cannot see otherwise, and we have to accept that.

PHARAOH FOOK II: More money put into integration I foresee, a couple more millions perhaps. I cannot see otherwise, and we have to accept that.


And so Pharaoh Fook the Second proceeded to bring in 100,000 more foreign workers into the little land of ancient Egypt. The whole place became too crowded everywhere and every time. The people became too unhappy and very easily irritated by the most minor event. Crime rate went up, productivity went down. The whole country was in a mess. Then one day, without warning, the whole country collapsed and sank into the sea! Alas, the little land of ancient Egypt could not take the load of 100,000 extra foreign workers! But luckily a few managed to escape from the country before it sank, including Fook the Third. Or else there won't be Ah Fook anymore!


What's happening: 2010 will be record growth year for Singapore: PM Lee
Posted by Unknown at 10:01 AM