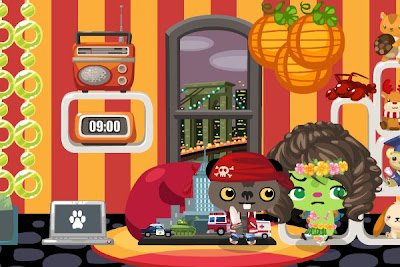 Ah Fook heard that a former Sydney stripper has been chosen to choreograph part of the opening ceremony for the Youth Olympic Games in Singapore. Apparently when the organisers said they wanted the YOG opening to be the "The Best Show on Earth in 2010", they were really serious and not drunk. Excited how the organisers have gone the extra extra miles to make sure the people have a reason to pay and watch the opening ceremony, Ah Fook paid a visit to the Australian Pole-dancer to find out more.

AUSTRALIAN POLE-DANCER: Thanks mate! I'm so thrilled to be invited! Seriously, I've never imagined I could make an international career out of exotic dance!

AH FOOK: Yah, good for you! So how's the preparation coming along?

AUSTRALIAN POLE-DANCER: Oh, twenty podiums and poles will be erected among the seating at the giant stadium, just 5m above the audience. You know, the organisers are really going lengths to make the stadium look as much like a strip club as possible, isn't it fantastic?

AH FOOK: Er... babe, I don't really care about the stadium. The most important thing is, how's the preparation of the girls? Have you found the strippers... oops, sorry, I meant dancers?

AUSTRALIAN POLE-DANCER: Ah, this is actually the difficult part. Not too many girls are doing pole dancing in Singapore so we have to start from scratch. I've got to teach the girls the very basics, and that really takes time. Teaching them how to strip would have been easier but unfortunately that is not part of the program.

AH FOOK: What? No stripping in the opening ceremony? Walauz...

AUSTRALIAN POLE-DANCER: Yah, it's a shame... But it seems pole-dancing is not really popular in Singapore yeh?

AH FOOK: Yah, but don't worry, I'm sure things will get better. After pole-dancing is performed in the previous NDP, and now in YOG, I'm sure Singapore will make a serious commitment to it and make sure pole-dancing becomes a national activity.

AUSTRALIAN POLE-DANCER: What? How do you make pole-dancing a national activity?

AH FOOK: Oh, we're good at that! We can start by replacing all the line dancing classes in CCs to pole dancing. I'm sure the aunties are sick of wearing cowboy hats and skirts by now and will wanna try something more exciting! Hey, and this will also attract more uncles too! Better for them to hang around in CCs than drinking beers at kopitiams right?

AUSTRALIAN POLE-DANCER: Aunties doing pole-dancing? Hmm... that might not be a good sight... but I do agree pole-dancing does benefit them more than the robotic line dancing. At least they'll be more flexible...

AH FOOK: And the ministers can also make use of pole-dancing to mingle with the people! Like mass pole-dancing! And knowing how we like to take things to extreme, we might be able to gather so many people that we break the world's record in the number of people in a mass pole-dance!

AUSTRALIAN POLE-DANCER: Damn, that's a good idea! Actually I too think that pole-dancing is good for Singaporeans, you know? It might help to bring up the falling birthrate of Singapore!

AUSTRALIAN POLE-DANCER: Anyway, if pole-dancing gets popular in Singapore, it is really good for me and my co-workers, because we could consider migrating over!


What's happening: Pole-dancing Bobbi to open Youth Olympic Games in Singapore
Posted by Unknown at 9:06 AM

I have just downloaded iStripper, so I can watch the sexiest virtual strippers on my taskbar.