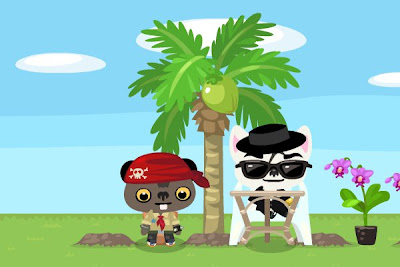 Ah Fook heard that his police friend has finally got the chance to use his handcuffs on someone outside his bedroom! He handcuffed a 57-year-old veteran photojournalist taking picture of the flood! How brave!

AH FOOK: Hey! I read that you handcuffed an old reporter! Tell me what happened!

POLICEMAN: Oh! That idiot! I tell you har, he damn pissed me off lor, if not I won't have used my handcuffs!

AH FOOK: What did he do? Did he really cause obstruction to the police and caused danger to himself and others, like what the police statement released?

POLICEMAN: Har? They released that? Wow... I thought that kind of statement only appears in CSI.

POLICEMAN: I won't really say he caused obstruction lah, I mean, the road is so wide, there wasn't really any traffic and there was just the few of us walking around... but I just don't like to see him standing there.

POLICEMAN: Save him? Oh yes! Yes I was trying to save him! You see har, this idiot was standing in a flooded area and on the manhole! Scali he fall down how? Then we have to call the ambulance you know? It's not like we're very free lor! We really don't need that kind of extra work!

AH FOOK: But how is this man standing over a manhole causing danger to others as well?

POLICEMAN: Ah Fook, I tell you lah, that morning I was already damn sianz. Saturday morning leh! I was supposed to be having breakfast and sipping my kopi in the station as usual and because of that stupid rain I had to be on the road! In the rain! Already damn DL liao! So this man is really at the wrong place at the wrong time lor!