Ah Fook and friend cancelled their swim because of oil spill 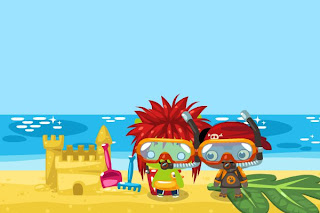 Ah Fook and friend happily strolled to the beach and prepared to dive into the waves when they realised that the beach was closed. A suspiciously strong stench of gas smell lingered at the whole beach as well. After confirming that none of them farted, they consulted their favorite adviser - the radio. The truth was indeed out there, in the afternoon news. A Malaysian tanker had collided with another bulk carrier registered in some ulu place called St Vincent and the Grenadines. And Ah Fook thought the weirdest and farthest place that he has known was Madagascar.

SWIM-MATE: Wah, so one big tanker langgar with another big carrier?

SWIM-MATE: But both are big ships right? And they can't see each other in bright daylight?

AH FOOK: Hmm... maybe because one is turning right and the other going straight and then the turn right one didn't wait for traffic to be clear?

SWIM-MATE: But big ships turn slow right? So how is it possible that the turn right vessel even make a wrong judgment? You see on-coming vessel, of course you don't eir-eir go and take your time turn right, right?

AH FOOK: Hmm... or maybe they langgar when changing lane, tanker want to cut into carrier's lane then carrier don't give way?

SWIM-MATE: Wah! The sea so big, do they really need to cut into each other's lane? Anyway, I still don't get it how two big ships can collide into one another during broad daylight...

AH FOOK: Oh! I know why! Maybe because both navigators were navigating the vessels with their eyes fixed on the GPS instead of looking at the sea ahead of them, so they didn't see each other, and so they langgar lor!

SWIM-MATE: Hmm... that is possible! Or maybe the carrier's brake not working!

AH FOOK: But one thing for sure, their insurance next year are sure going to be rocket high!